Posted on October 15, 2011 by Diana Morningstar

Featured in my gallery: 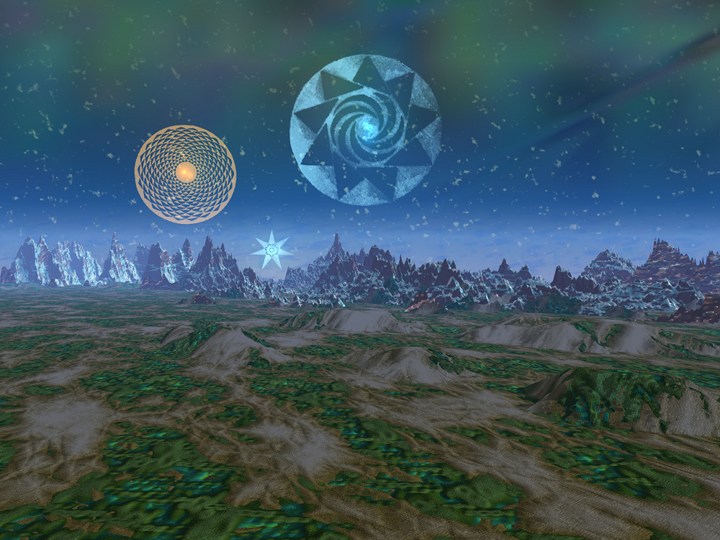 This image, entitled ‘Tralfamadore’ depicts an alien landscape with crop circle mandalas floating in the sky, a place where spacetime itself is bent differently. This is a place so far from Earth that whatever shines up in that sky doesn’t even look like stars, maybe some sort of scattered galaxies, or perhaps what stars look like to four dimensional beings. In the foreground, something like agriculture may be taking place. Are there creatures living there who stare in wonder at the patterns impressed upon their crops by unknown minds from far away?

The sky in this scene is actually a big Bryce cube in the background coated with a procedural texture. This is one of those times when Bryce’s procedural texture generator came up with the right magic early on and it was then a matter of tweaking the parameters to get it just so, with delicate twilit haze and auroras worked in by tweaking filter settings. The terrain texture took a bit more deliberate planning and choosing of blending, frequency, and coloration to get things painted in to my satisfaction. Much of the surface of this image is covered with just these two Bryce procedural textures, so some fussing with them was in order.

For a sampling of what I and other 3D digital graphic artists have created, see the 3d digital art gallery at Fine Art America.