New in my gallery: 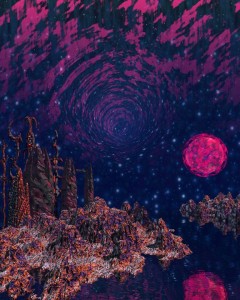 At the far end of the Hyadean wormhole the laws of physics are a little different, and Earthly mortals who venture there risk their sanity. The towers of lost Carcosa loom beside the lake, left behind by some forgotten highly alien beings. The dread presence of Hastur awaits, and only those who desperately desire total transformation at any cost dare drink from this lake.

“Strange is the night where black stars rise,
And strange moons circle through the skies,
But stranger still is Lost Carcosa.”
Robert W. Chambers,
“The King in Yellow”

Lake Hali was invented by Robert W. Chambers using names from Ambrose Bierce, and the myths of Hali, Carcosa, and Hastur have been extended and embellished by H. P. Lovecraft and his fans and followers ever since.

This project started out long ago as an experiment with using a Bryce terrain as a sky backdrop and morphed from there. The project has continued to reside on my old Mac G3, which has rendered it to 4000 pixels across in one afternoon without complaint, before I ported it to a more modern computer for retouch. The effects simply have never looked the same in any other render environment. This contrasts favorably with some more modern 3D software I’ve been dealing with that moans about insufficient system resources and goes catatonic at render time despite several orders of magnitude more processing power and memory available, even when I’m only asking for less than 3000 pixels. I’m afraid software code inefficiency is growing even faster than Moore’s law. This old Mac comes equipped with a 0.3 Ghz single core and 0.192 GB of RAM for goodness sake! Once every old art project I want to extract has been rendered to maximum size, it will finally be retired with honors. So far, rendering each project at the maximum allowed size has only been a matter of time, never a question of whether the old computer could do it. Hats off to Steve Jobs for creating an amazingly stable and useful computer for its time, one that changed my life when it first arrived on my desktop.
Tweet