My gallery image ‘Tulgey Wood’ has been upgraded with an improved render to 3600 pixels and a new detailing effort to bring the image to a better level yet. 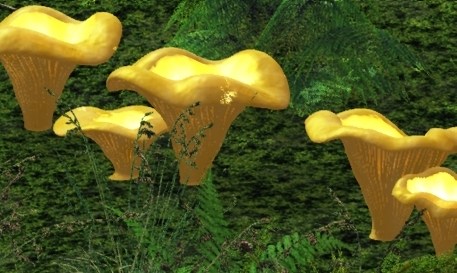 Here are some virtual chanterelle mushrooms in a detail from this image. These are 3D mesh model mushrooms, each one having its own little virtual light source and being made slightly translucent.

Yes, there is a jabberwocky in this tulgey wood, or is that just the shadows of the branches and a strategically placed lichen? Do I hear whiffling and burbling somewhere among the trees? OK, so I did slightly enhance the jabberwocky on the higher resolution render, but it was mostly there to begin with in the interplay of virtual light and shadow.

This image had to be rendered in 12 sections to coax it out of Vue 6’s render engine. Yes, this is a Vue 6 project. Porting to Vue 7 actually increased instability and decreased maximum render size, so a Vue 6 project it remains. (Other projects upgraded for the better, but not this one.)
Tweet

This entry was posted in 3D Digital Graphics. Bookmark the permalink.